We are proud to announce that we have added Lenon’s Lures to our product line-up! 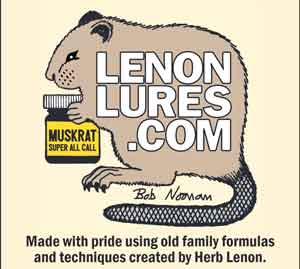 Lenon Lures – Herb Lenon (1902-1979) was a legend in the trapping industry.  He was a professional trapper from Michigan who became a household name among trappers throughout the U.S. and Canada.  In addition to catching piles of fur, instructing other trappers and writing for major trapping magazines, Herb developed Lenon Lures, a line of trapping lures that continue to catch fur to this day.  Lenon’s species-specific “Super All Call” line of lures are among those formulated by Herb through experience on the trapline, and continue to put fur on stretchers.

Herb’s son Asa Lenon, a well known trapper in his own right, took over his father’s lure making business after Herb passed.  Asa recently turned the business over to John Chagnon, a lifelong trapper, friend of the Lenons, and founder of PCS Outdoors.  John continues to work with Asa to ensure the lure formulas are made the very same way Herb did it.  John is proud to continue the tradition of Lenon Lures and serve the faithful trappers who have relied on these products for decades, as well as introducing new trappers to the products.